It’s panto season right now, and last Friday Happy Mondays found themselves playing Kilmarnock’s Grand Hall, right through the wall from the conjoined Palace Theatre where an assortment of bit-part actors and actresses more accustomed to the outer reaches of Scottish television productions were hamming their way through an innuendo-packed Dick Whittington. Oh yes they were. 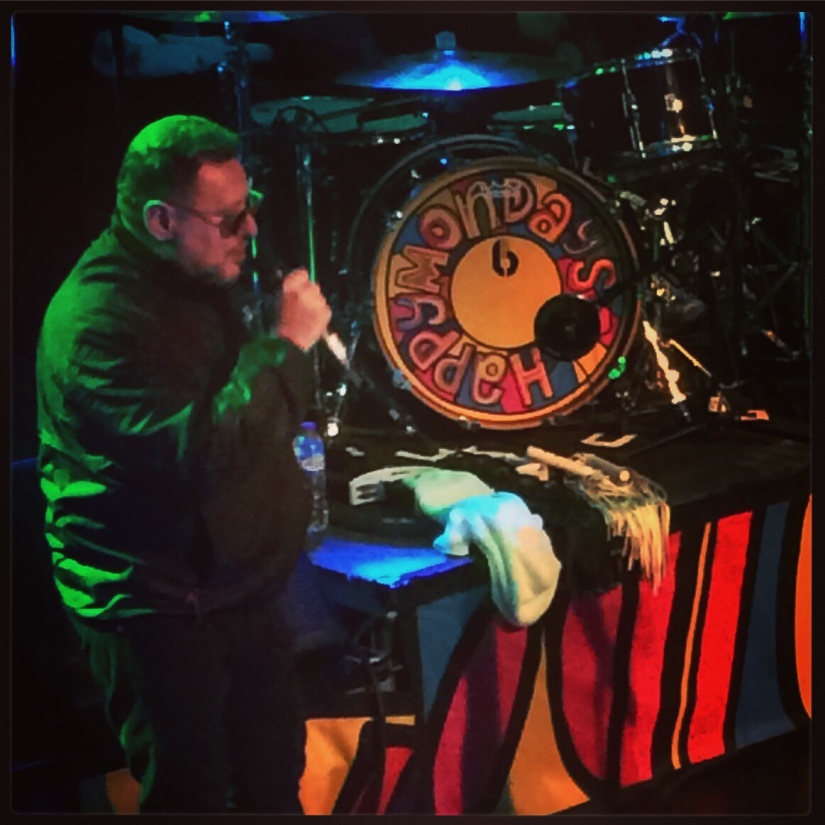 The ‘Mondays clearly felt the need to put their own panto spin on what was a gloriously ramshackle night. Bez played the court jester perfectly, greeted with cheers and mile-wide smiles whenever he bounced onto the stage and into his boggle-eyed four-step shuffle.

With a pair of maracas permanently set to ‘shake’, he’s stage left, then stage right, then up a speaker stack, then swinging off a microphone stand, then kissing Rowetta, then swapping his t-shirt with some equally boggle-eyed guy in the audience.

He’s the focal point for a band who despite their undeniable groove are as static and stony-faced as the Easter Island statues.

The role of panto villain falls to Shaun. “Check out our kid!” he drawls, looking stage left towards his bass-playing brother Paul. “Look at ‘im. ‘E’s a right miserable coooont!”

Nowadays dressed in mildly expensive rather than wildly expansive clothing, he has all the air of one of those ex football casual ne’erdowells you’ll meet in the opening scenes of The Bill. “Get down from there, Bez,” he implored in the same voice you’ll know from the opening lines of Mad Cyril. “You’ll get yourself killed!”

“What’s the difference between me and B?” he asks the audience, as Bez ungloriously tries to remove himself from the top of the speaker stack at the front of the stage. “Bez is a grandfather.”

Think about that for a second. 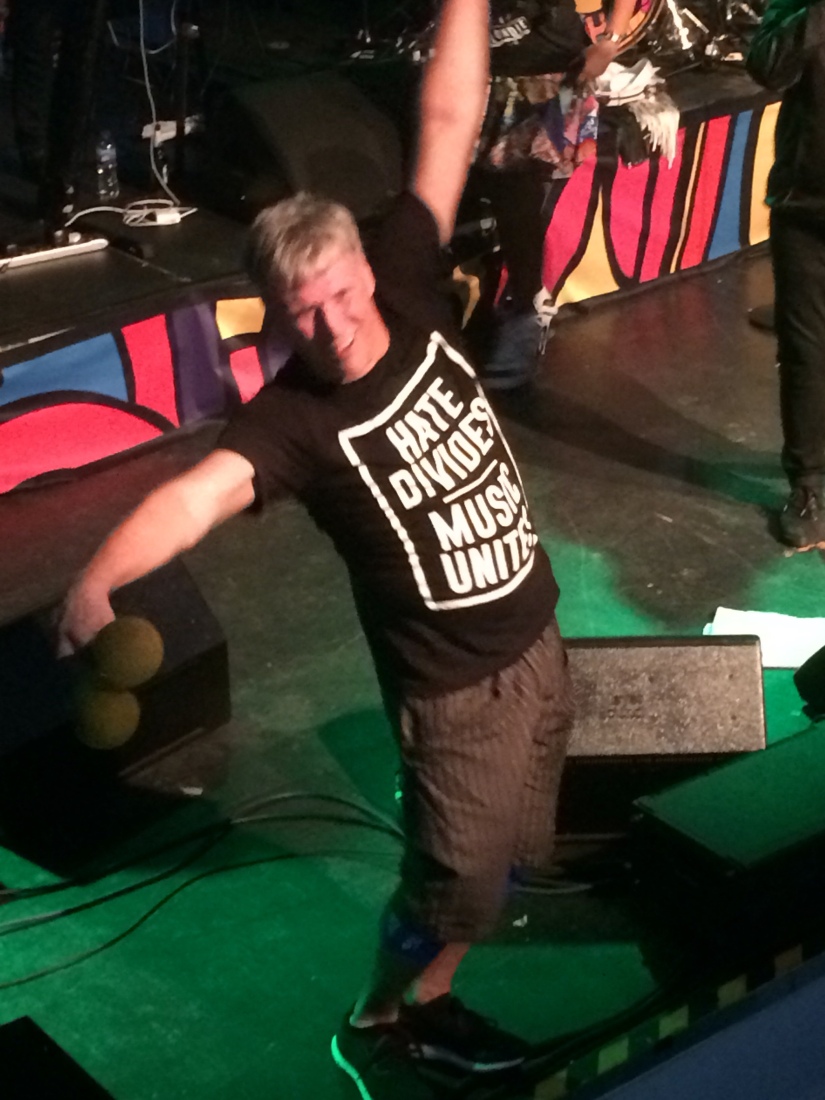 It’s not just his dress sense that’s undergone a radical rethink. At Happy Mondays’ Barrowlands show at the tail end of the 80s, Shaun freely puffed on never-ending metre-long spliffs, sitting plastic-faced on the drum riser for the entire gig. Shaun still remains rooted to his spot between the keyboards and drums, but these days he vapes vigorously during all the instrumental passages. He vapes! Suck on that, Keith Richards!

Shaun doesn’t do much else. He never removes his jacket. He never even unzips it. He’s wrapped up for winter even if it feels like the summer of love in here. Occasionally he’ll sidle up behind Rowetta and indulge in a spot of dirty dancing. Rowetta, co-vocalist since those heady days of 1990 is tonight’s panto dame. Alarmingly shorter than I had remembered – she looked like someone had taken a photo of her from back in the day and squashed it without keeping the aspect ratio the same – she wobbled onto stage in custom-made, mile high Adidas platforms, reappearing every other song wearing a different Grand Central Design-inspired costume.

“Do what you’re doing, sing what you’re singing, go where you’re going, think what you’re thinking,” she belts out during opening number Loose Fit.

“Let’s see ya, then!” he says, removing his sunglasses for the first and last time of the night. We’re off and running. This tour is billed as the 24 Hour Party People Greatest Hits tour. Whether that means a retread of the debut album (it doesn’t, as it transpires) or we’re due a run through of 30 years of Happy Mondays’ greatest material (it doesn’t quite do this either) is clearly open to creative interpretation. I’m not entirely convinced the band themselves knew what they would be playing each night of the tour.

Now and again Shaun’ll lean over the set list. “Fookin ‘ell!” he’ll moan. “Here’s another one we ‘aven’t played since 1986.” It’s a terrific choice of songs on offer, from the clattering industrial funk of Clap Your Hands and Freaky Dancing to the Balearic-kissed Donovan and Bob’s Yer Uncle.

Stand-outs were a filthy Kinky Afro, a steroid-pumped 24 Hour Party People and a helium-high Hallelujah, dedicated to Kirsty MacColl. A euphoric mid-set Step On, a song that didn’t really do it for me back in the day (too populist for this old grump, y’see) did its very best to raise the roof on Friday night. The encore – an e-longated and trippy run through of Wrote For Luck was almost worth the price of admission alone.

I say almost. Tickets for the gig were quite expensive. For a 30th anniversary show, you might expect it to be longer than 14 songs, over and out in about an hour and 20 minutes. I certainly did. By the time the last notes of WFL had stopped crashing off the Grand Hall’s walls, most of the band had run from the venue, steadfastly refusing any requests for signatures and selfies and were in a car on the way to their hotel “somewhere near Glasgow.” It’s the one gripe I have. That, and the fact I’m still waiting on the “quick 5 minutes” interview I’m sure they promised me before the show. 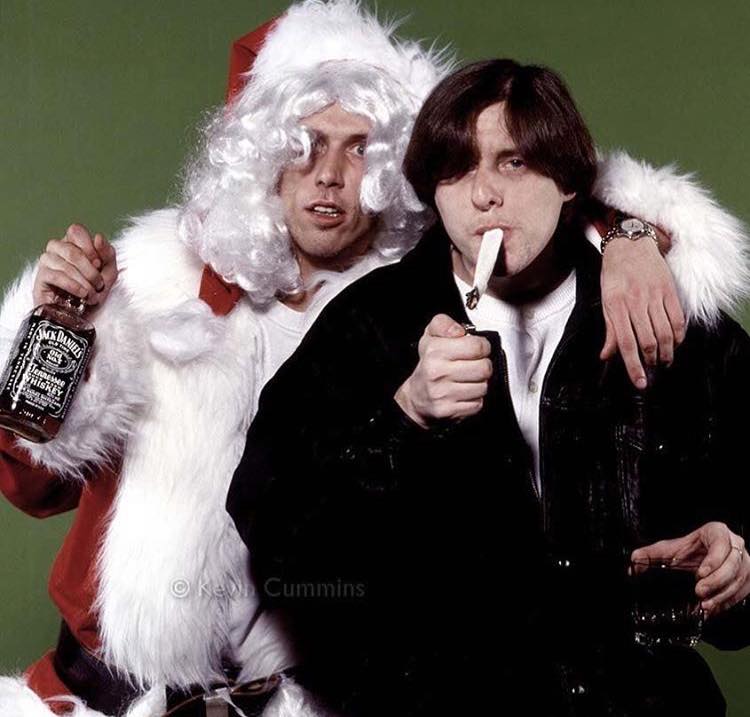