I’ve kinda lost my way a wee bit with Neil Young. I bought Le Noise, 7? 8? years ago, played it once then filed it on the shelf alongside all the other inessential Neil albums of the time. Chrome Dreams II, for example. Or the live one that came out around 2001 and included a couple of tracks as yet unavailable elsewhere (I think). Without reaching for either of them, I doubt I could tell you a single track on them. Jeez – I can’t even tell you the name of one of them. You buy things out of blind loyalty to an artist and that’s what happens. 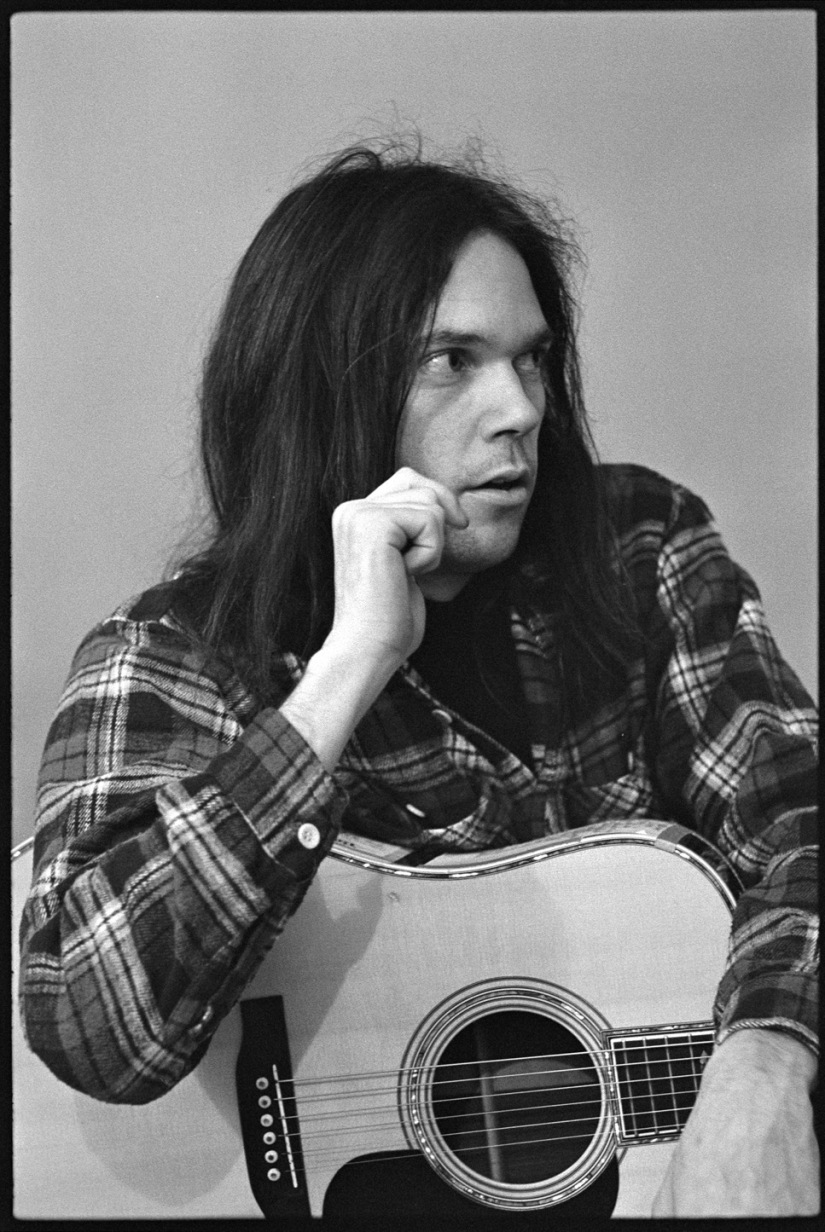 I’m also out of touch with where his Archive series is up to. Are we still just on Volume 1 of the sprawling, all-encompassing Blu-Ray only release? Like many here, I suspect, I’m quite happy to admit I liberated the best of that release via one of the many Torrent sites that clutter up the darker corners of the internet. Some of the stuff probably ended up featured in posts on Plain Or Pan too. And those first couple of live shows he released on his more budget-friendly Neil Young Archives Series – the Massey Hall and Filmore shows – are essential for any and all fans of raggedly-plucked acoustic rock and ragged and raucous sprawling rock music. A quick trip to Wiki tells me there are around a further half dozen such releases, no doubt all good, but I just don’t seem to have the time to invest in them. Sorry Neil, although I’ll probably get around to Hitchiker at some point soon. It does float my boat in all the best ways; vintage mid 70s material scrubbed up for these days? Sounds great.

Why though would you want to seek out a ropey live recording featuring Neil and his International Harvesters when you could be diving headfirst instead into his self-proclaimed ‘Doom Trilogy’? Neil, never one to conform to expectations was at an all-time career high with 1972’s Harvest album. Building on the themes and musical styles of its predecessor After The Goldrush, Harvest spawned an actual hit single, with the lilting cowboy balladry of Heart Of Gold seemingly assuring Young his place at the top table of FM-friendly pop alongside other chart-bothering acoustic balladeers such as Paul Simon and Don McLean. Instead, Young yanked hard on the steering wheel and, in his own words veered into the ditch.

“ ‘Heart Of Gold’ put me in the middle of the road. Travelling there soon became a bore so I headed for the ditch. A rougher ride but I saw more interesting people there.”

Young took the path less travelled, wrote the songs he wasn’t expected to write and ended up with a trilogy of fantastic albums. Much of this music achieved mythical, cult status as the years grew, due in no small part to  Young willfully deleting the key albums and, in the advent of the CD era, refusing to have them released on the shiny new format. Citing the poor sonic quality of the format (according to Neil, compared with vinyl only about 5% of the recorded music makes it from the CD and out of your speakers. The other 95% is a flattened, compressed version of the real thing), Neil Young hates CD with a passion. He’s analogue all the way, which is why if you can track down original vinyl copies of On The Beach, Time Fades Away and Tonight’s The Night you should buy them forthwith and revel in the tunes in the grooves. 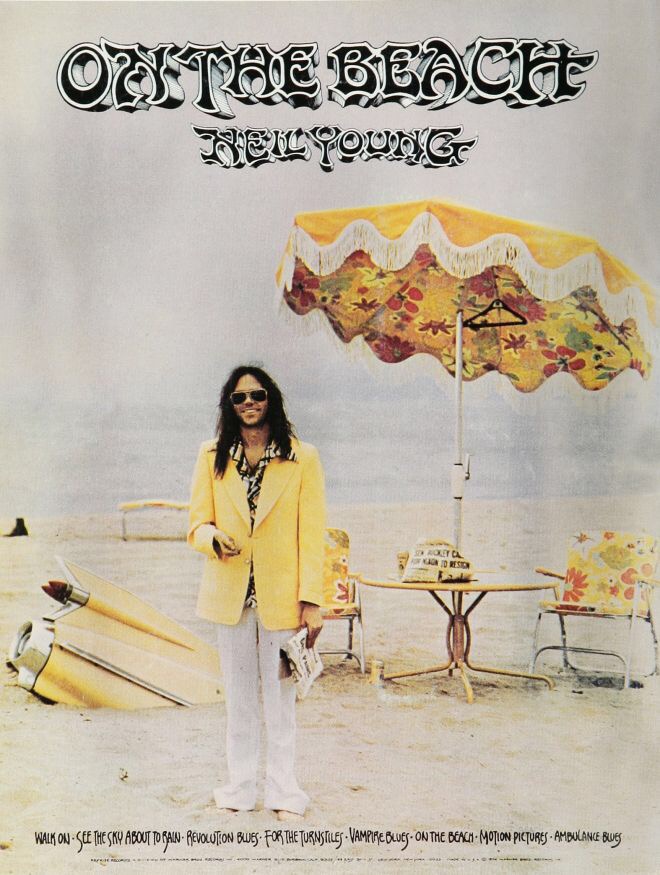 On The Beach is easily one of my favourite albums of all time. Hardly a ringing endorsment from a barometer of hip opinion such as myself, but it truly is a terrific LP. Years ago my sister went a trip to New York and when she asked if I’d like her to bring me anything back, I replied that I’d hate to think she’d find a copy of On The Beach and not buy it. She only went and did. A first issue, Reprise Records release, with the famous psychedelic printing on the reverse of the cover too. An astonishing present.

Hardly a rollicking good time, On the Beach is the sound of depression, paranoia and nervous breakdown. But if it’s self-indulgent, self-obsessed music you’re after, look no further. Charles Manson, the young hopeful he’d suggested to Reprise had by now commited his heinous murders. Young sings about it in the scratchy, jittering Revolution Blues, assisted by The Band’s Rick Danko and Levom Helm on bass and drums and David Crosby on rattly and erratic rhythm guitar.

It’s the sound of anti-commercialism in every way. Downbeat, downplayed and downtrodden, Vampire Blues is an eco anthem before such things were considered, Young bemoaning the way the oil industry bore into US soil with scant regard for people or place. “I’m a vampire, baby, sucking blood from the earth,” he sings, a million miles away from Heart Of Gold and the Hot 100.

Neil Young – On The Beach

The title track is a gorgeous, chiming ode to despair. “I went to the radio interview….I ended up alone at the microphone.” sighs Neil. “I think I’ll get out of town.” This is the same optimist who, only a few months earlier, had been singing  “I want to live, I want to love, I’ll be  a miner for a heart of gold.” Not now daddy-o. By the time you reach ‘Ambulance Blues‘, the album closer, Neil’ll be informing you that we’re all just wasting our time, “pissing in the wind“. Apparently, side 2 was originally to be side 1 and only at the last minute was Neil convinced to switch it around, something he immedialtely regretted. It means though that the album opens with the jaunty Walk On, a curveball as it turns out, before the mood of the album takes hold. If the album had been released as Young had intended, how many folk would’ve made it all the way to side 2?

Here’s Mercury Rev’s faithful reworking of Vampire Blues. I remember reading at the time that the band had planned to record the entire On The Beach album and add a track at a time to the b-side of future singles. Did they ever complete this? Seemingly I’ve lost my way with Mercury Rev too.

Here’s Nina Persson of The Cardigans in her A Camp guise doing a terrific version of On The Beach at the Hutsfred Festival a few years ago. I’m sure this has appeared on Plain Or Pan before, but if you missed it first time ’round…

A Camp – On The Beach