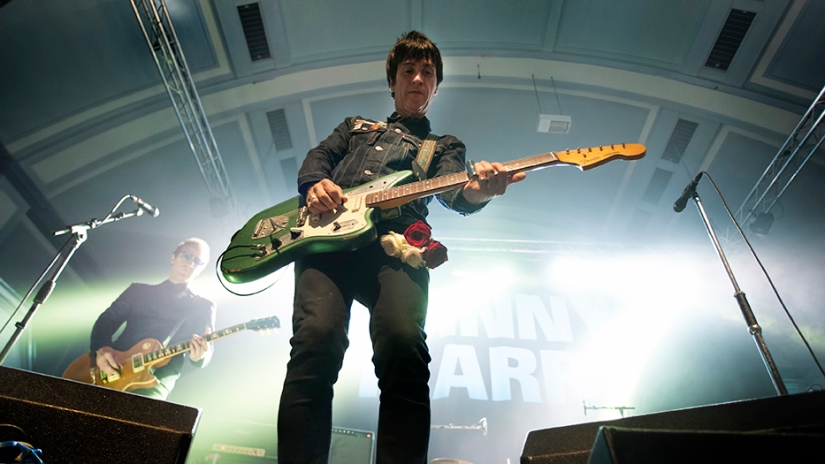 There was a defining moment last Thursday night when Johnny Marr was up in space somewhere, out among the stars and playing his melodies gifted from the Gods, showering the faithful at his feet with little arpeggiated notes of joy. It all happened midway through his celebratory, revelatory gig in Kilmarnock’s Grand Hall, and midway through a pulsing take on Electronic‘s evergreen Getting Away With It. Recast as an electro throb (“This is a disco song from Manchester“) with jagged, edgy guitars, it was accompanied by a pair of stark blue flashing strobes, marching in time to the guttural punch of the bass. As the song reached its peak, somewhere a flick of the switch turned the venue from rave central into a spangled, sparkled music box. The light changed from stark blue to glitter ball white as the music shifted from electro pulse to pure Marr; the chiming, echoing notes cannoning off the turn of the century walls and out into the ether. Surrounded by a swirl of mirrored light careering from a pair of over-sized disco balls and out on the edge of the 6 ft high stage, lost in his own music, it did indeed look like Johnny Marr was on the edge of the universe.

My day with Johnny was a day like no other. I’d interviewed him 2 weeks previously, giving me something of an ‘in’ when it came the time to meet him. I should backtrack slightly here. I’m part of the team who promoted the gig, so I was involved in the set-up of it. This meant me and my giddy head would be around the venue for the day leading up to the show itself. At the end of our interview, Johnny had promised to sign my guitar, and I’d carefully left it by the mixing desk, within eyesight at all times.

He was due to soundcheck at 4pm, and by half 2 I was starving. He wasn’t in the venue as he’d gone off for a jog around the provincial town of Kilmarnock, but I didn’t want to chance nipping out to a shop for a quick sandwich in case my moment would arrive. After the show, I reasoned, it would be pandemonium with people clamouring for his attention – before the show was my best bet at face-to-face conversation. I was having a conversation with his tour manager (about aeroplanes, of all things), when I was first aware of his presence. Some folk will tell you that the room changes when a famous person enters. In typical Johnny fashion, he made his announcement via his guitar. With my back to the stage, a quick blast of distorted blues gave way to the recognisable riff of The Headmaster Ritual. I tried to act non-plussed in front of the tour manager, but my eyes gave it away. He stopped our conversation and wandered off, leaving Johnny playing to an empty Grand Hall, save myself and a disinterested sound engineer by the mixing desk.

Stone me! It’s Johnny Marr! With cool hair. In a none-more-punk mohair sweater and a pair of jeans my 14 year old daughter might struggle to get into. He’s tiny! Put-him-in-your-pocket tiny! Like a little Lego version of the real thing, he bent down by his pedal board and made a few adjustments, now and again clanging a chord for good measure. Calling his technical team over he explained what he wanted. “When I play with this pedal (Clang! Tchk Tchk Tchk Tchk Tchk… ) I want those little blue lasers. When I use the reverb (Clang! Dun-dun-dun-dun-dun…) I want the subtle wash.” The whole show, it struck me there and then, is as choreographed as a Legs ‘n Co dance routine. Albeit a post-punk riot of Marr originals and Smiths’ classics, but a scripted, well-rehearsed version of spontaneity nonetheless.

Once happy with the instructions given to his lighting guys he bounces off the stage, keenly aware of my presence. “Johnny!” I call out, and he comes over. “We spoke on the phone a couple of weeks ago.”

“Craig?!? Great article, brother! How’s your little lad? Still playing his guitar? Did you bring yours then?” and before I’m fully aware of the situation I’m actually in, he’s leading me across to the mixing desk where he’s spied my guitar case. “Go on then! Let’s see it!” and he takes it out of the case, ignoring the Smiths vinyl I’ve stashed there for signing. “I like it….a ’78 you said? Californian? Great – a proper punk guitar!” He turns it over in his hands, casting his eye over the details. “No binding on the neck. I like that. See that knot in the wood there? Love it. Not too heavy….d’you know the green one I played on the Meat Is Murder LP? (of course I know it!) It weighed a ton. This is a nice guitar. You’ve got a good one there.” And then he puts it on. I’m about to pee my pants in excitement.

“What’s your favourite Smiths tracks?” He plays a few Marr-esque open chord runs up and down the neck. This! Can’t! Be! Happening! Then he notices my Queen Is Dead LP, lying expectantly for the caress of a Sharpie. “Have you worked out Some Girls Are Bigger Than Others yet?” And he plays it. Effortlessly and perfectly. He lets me video him playing it too. This is all too much. Of course, I only go and spoil it.

“So,” I say confidently. “Do you use your 3rd finger or your pinky for this part…” and, as he hands me my own guitar, the one I’ve played constantly for 25 or so years, I proceed to tie my fat fingers in knots whilst playing not only the wrong notes but the wrong fucking strings. Some Girls.. is a tune I play regularly, and while I’m not super fluid with it, I’ve never once played it as badly as I do at this very moment. Put it down to big match nerves, but I’ve really let myself down here. 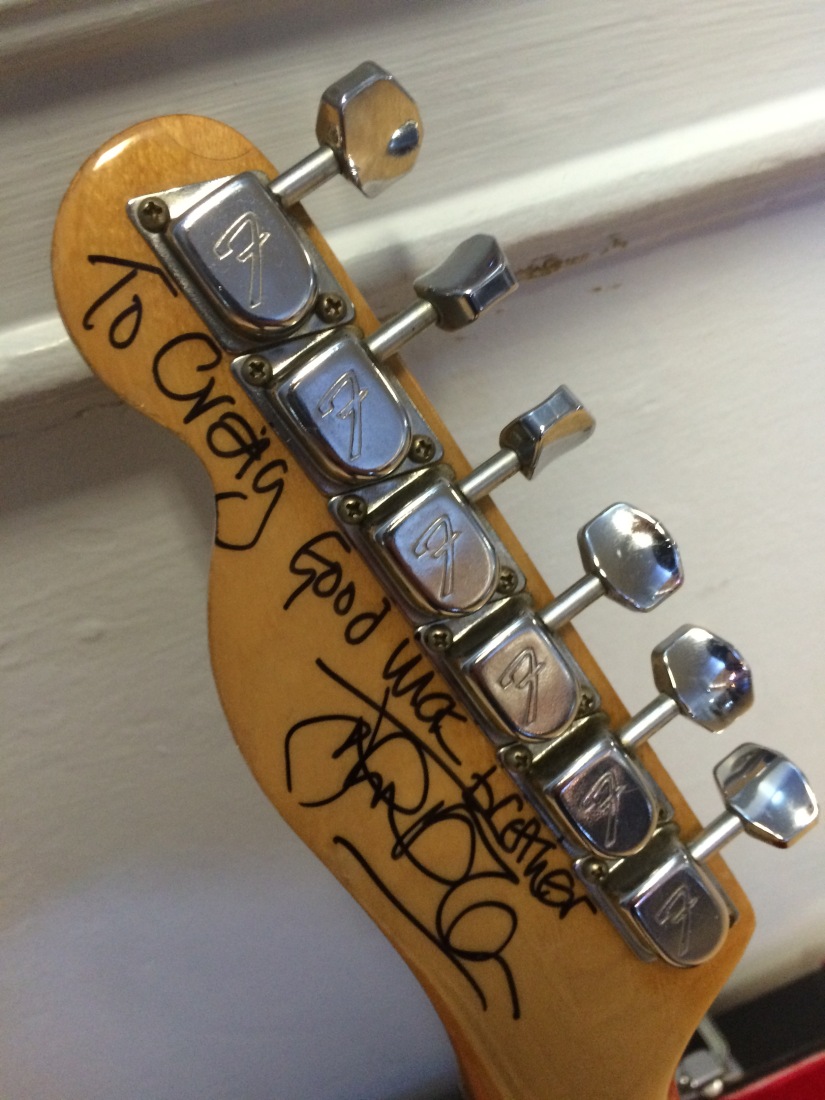 Anyway, our conversation continues for a while. We get pictures, he signs my guitar, he signs my Smiths vinyl, we hug, he says thanks again for writing a great article, (brother) and then he’s off to join his band for the soundcheck proper, where I watch from the balcony as they play their version of Depeche Mode’s I Feel You a couple of times and run through a ramshackle version of The Sweet’s Ballroom Blitz.

“Ever since we announced the Kilmarnock gig, people keep telling me it’s the place where the Ballroom Blitz happened.” (The man at the back said ‘everyone attack‘ was apparently shouted as a fight broke out during a Sweet gig in the Grand Hall in the early 70’s, something that has now passed into local legend.) “It’s not on the set-list, but if it turns out OK in the soundcheck, we might do it in the encore.” As it turns out, they don’t, though Johnny does ad-lib a few lines towards the end of Boys Get Straight.

The gig itself? It’s super great, of course. A heady mixture of Messenger and Playland tracks, interspersed with choice selections from The Smiths’ superlative back catalogue. Second song in is is Panic and the room goes berserk. Johnny is a whippet thin rod of electricity, darting from one side of the stage to the other. Pogoing here. Windmilling there. In profile. In sillhouette. In denim jacket. In spotty shirt. Take your eyes off him at your peril. The Headmaster Ritual gets another outing. There’s a fantastic breakneck galloping Bigmouth Strikes Again. There Is A Light is mass communion. You Just Haven’t Earned It Yet, Baby, surely the best Smiths track to never be a single, kicks off the encore, where he’s joined by his son Nile (from support band Man Made – they’re worth a-watchin’) on a surprisingly good take on The Primitives’ Crash.

By the last song of the night, Johnny has us in the palms of his teeny tiny talented hands. How Soon Is Now? is a wobbling, juddering juggernaut, Marr wringing sustained notes of feedback from his famous green Jag. I decide to throw caution to the wind and, relying solely on the AAA pass I’m proudly wearing (remember Wayne’s World?) I’m off into the photographers’ pit, empty by law of the management since the 4th song and hoping for a decent snap of the occasion. As Johnny starts his de-tuning freak-out, I rush in. “Johnneeeey!” I scream, and he looks my way – purely coincidental, but still – and stands right above me, posing for me, as my phone fires as many photos as it can handle. He looks down from the top of the mountain at one point and gives me a wink (!) and then he’s off back to the mike, my photos in the bag. It’s all quite thrilling. 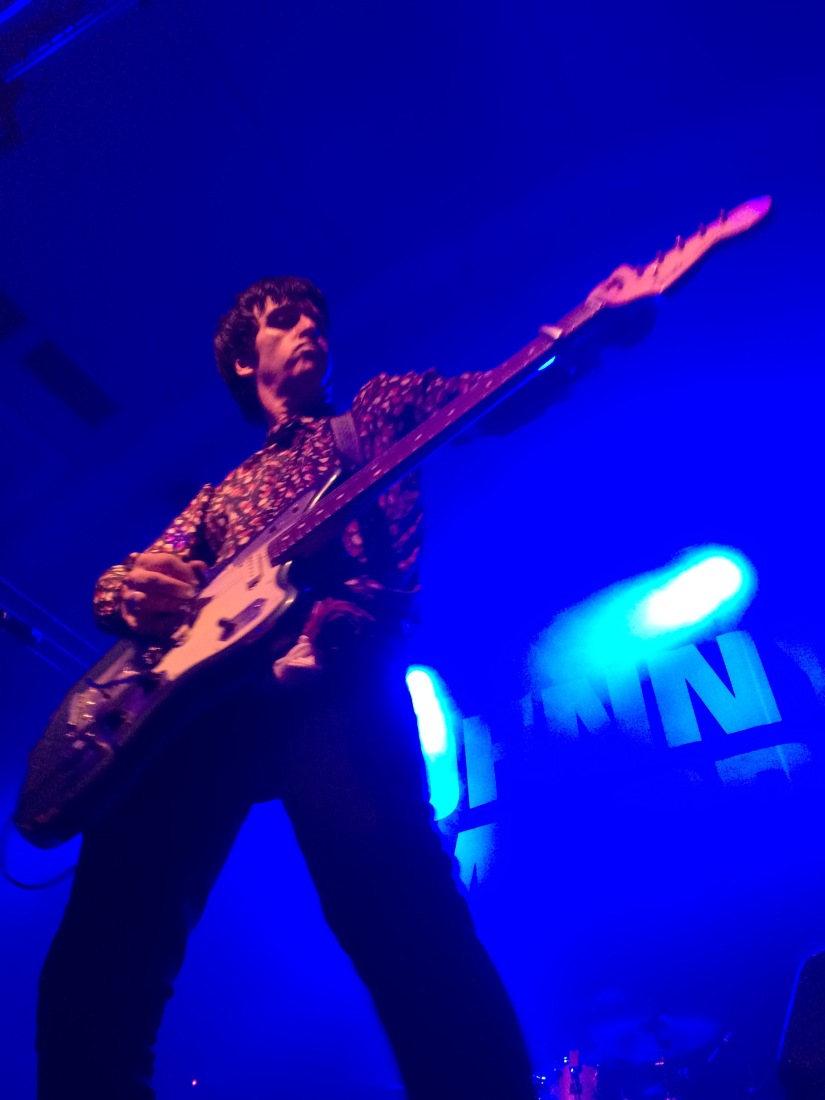 There’s more conversation (“neat capo trick, by the way, I tried it out. I’m gonna use that on something!“) and pictures after the show, a show he genuinely loved doing. It’s after midnight by the time we pack up and I head home carrying a signed guitar, a couple of signed Smiths records, Johnny’s set list, his road tested and slightly chipped signature-bearing plectrum….and the red and white roses that dangled from his belt loop for the entirety of the gig. Quite what I’ll do with them, I don’t know. They’re sitting in front of me as I type, a faded and falling apart memento of a day that will never fade from my memory. It’ll be quite a while before they’ve scraped me down from the ceiling, believe me. 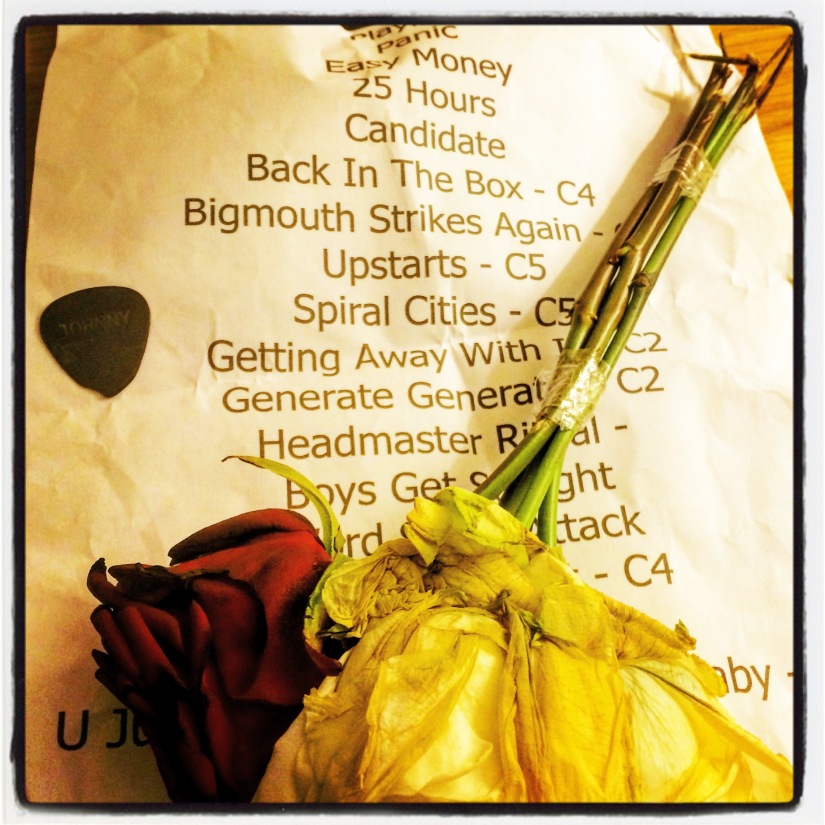