I Wish You Would by The Yardbirds is a nagging, insistent blast of garage blues from 1964.

The Yardbirds – I Wish You Would 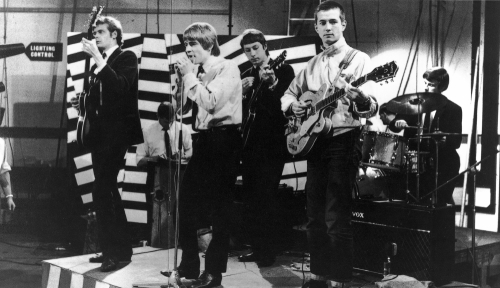 It was their debut single, lifted hook, line and sinker from Billy Boy Arnold‘s 1955 track of the same name and re-sold as the hot new thing. It’s the sort of track that wouldn’t sound out of place on a Nuggets or Pebbles compilation.

When David Bowie heard it and/or saw The Yardbirds at the Ricky Tick or Marquee or whatever venue was most hip and most happening that week, something stuck with him. In 1973, pre-dating Lenny Kaye’s Nuggets theme by a good few years, he put together Pin Ups, a fine fine album of parochial r’n’ b stompers from his formative years; The Kinks, The Who, The Pretty Things…. all corners of the Brit beat group movement were covered, including The Yardbird’s Chelsea-booted stomper.

David Bowie – I Wish You Would

In typical Bowie fashion, his version sounds less like the original and more like a wired, paranoid blues from outer space.

Just a few short months on from the Ziggy album and tour, The Spiders From Mars band are all over it like a glam-slamming racket, Mick Ronson’s Gold Top set to boogie before wigging out in a brief Eastern ragga towards the end. I used to think it was the definitive version until I heard this…

Rod Stewart – I Wish You Would

He’s an easy target, is Rod. He’s certainly had his knockers (arf) but believe me, this is terrific from start to finish! Mock Rod at your peril.

Rod’s version is a full-on mic swinging, hip swiveling, spandex clad romp. It‘s proof that, despite the nickname he was always more rocker than mod. It recalls a prime-time loose ‘n lairy Faces. Listen to him bark out the commands in that voice that’s equal parts sandpaper and sawdust; “First verse!” “Second verse!” “Bridge!” “Sow-low!” You can picture him, strutting across some Mid-Western balloon-filled stage or other, chest puffed, leaning back into the mic the way he does.

Rod’s voice is superb, all mock cockney and nary a hint of the Scots blood that he’s so proud of. He carries the track from start to finish, his band doing the best bar-room blues that can be coaxed out of them. “And away we go! Whatever happens happens! Let’s just do it!” he instructs, his band hanging on in there right until the end, dive-bombing bass runs, runaway harmonica solo, 3-note riff and all. It’s crackin’!

What’s all the more amazing is that Rod’s take on I Wish You Would is from a long-forgotten studio session sometime in the mid 80s, when he really had no right at all to be recording stuff as thrillingly essential as this. See when he was jumping about in his videos wearing a pink tracksuit and a yellow sun visor on his head? He coulda been filing the charts with dumb rock ‘n roll like this instead. What a wasted opportunity.