“What’s the first song you’re gonna do for us?”

And off they go, the Trash Can Sinatras jangling away with an easy fluidity that comes from years of playing together. I don’t like that word ‘jangling‘. It conjours up images of spotty boys with greasy fringes singing about the unattainability of girls called Emily or whoever. But this track is the essence of jangling. It’s a beauty. 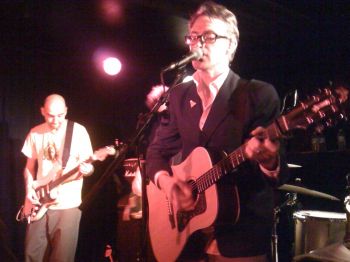 When I first heard the Trashcans doing it, taped in the moment from (I think) a Johnny Walker BBC Radio 2 session, I thought it was the best thing they’d ever done. And it wasn’t even their song. I’d heard of The Mekons. A country-ish, new wave-ish band from somewhere in the north of England, but I’d never actually heard them. Country-ish didn’t register with me then, and to be honest, it still doesn’t register with me now. There are exceptions of course, but overall? Nah.

I played the TCS version endlessly. This was the Trashcans at their peak. Ghosts Of American Astronauts sounded great – the band perfectly captured forever. I could actually see the band in my head as it played, Paul, head bowed in his suit jacket, firing of the wee electric guitar riff. Stephen, bendy of neck and floppy of limbs, recreating the original’s tumbling drum rolls. Frank, voice coated in layers of echo, standing off-mike and taking a step forward every now and again to get the dynamics in his voice. John would be somewhere stage right, glancing now and again at Davy as they kept the rhythm rattling forwards.

Recorded around the time of A Happy Pocket (great songs written under greatly difficult circumstances), everything the Trashcans recorded at this point in time was solid gold. Every b-side that accompanied the Happy Pocket singles could’ve been an a-side in their own right. That they were displaced as b-sides is testimony to the band’s quiet belief that they were expert songwriters. A loudmouth like Noel Gallagher would’ve casually said “there’s plenty more where that came from“, but the Trashcans are not the sort of band that blow their own trumpet. At this point in time they were riding the crest of a wave. A wave that would test them somewhat for the next few years, but there and then the Trashcans were superior to anyone else putting out records. You knew that already, though.

Fast forward to 2004, and the band, label-less and a some-time 4 piece found themselves in New York recording what would become the follow-up to Weightlifting (the band’s high water mark) and supplementing the cost of living by playing the odd acoustic show. The ‘Fez‘ album, available here is an excellent document of the time. Recorded at one of the Fez shows (but not released) was another version of Ghosts Of American Astronauts.

You can tell a lot about a band from their choice of covers. The Trashcans have tackled a fair few in their time and they always like to add their own unique stamp to it. Imagine my surprise then, when years later I discovered The Mekons’ original version via the world wide web. The Trashcan’s version is something of a carbon copy. Why would you want to mess with anything as good as this though?

The Mekons – Ghosts Of American Astronauts