Every school had their own Billy Bullshit and Alan Harper* was ours. Harper was quite a quiet guy, but when he talked, he talked about 3 things – fishing, going fishing with his uncle, and just how great his uncle was at fishing and other pursuits. “My uncle caught a salmon that was bigger than my gran’s Collie but he had to throw it back in the river cos he said we wouldn’t be able to eat it all in one go and the rest of it wouldn’t have fitted in my auntie’s freezer.” Aye?!

“My uncle scored a one-four-seven against Hurricane Higgins in a challenge match at the snooker last year and Steve Davis refused to play him after that so he got a bye into the final against Ray Reardon but Ray Reardon beat him.” Oh aye?!

“My uncle used to play for Irvine Meadow and Rangers wanted to sign him as a winger but he wouldn’t sign for them unless they played him instead of Derek Johnstone at centre forward so they signed Davie Cooper instead.” Aye?! Really?!

“Phil Lynott asked my uncle to play lead guitar in Thin Lizzy after they played at the Magnum but my uncle was playing bass in a wedding band at the time and didn’t want to let them down.” Aye?! Right! You know the sort of talk…equal parts riveting and ridiculous.

Alan Harper was also quite a sturdy guy. We used to laugh at the outlandishness of it all behind his back, but one day, just before physics, Harper caught me laughing at his latest claim and BANG!, he thumped me clean on the nose. There were tears and blood and I never again laughed at the utter pish he spoke.

*name changed to protect the innocent (me). 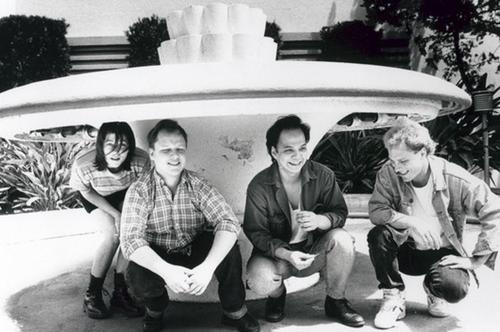 River Euphrates was the first track I ever heard by the Pixies. It arrived like that Harper left hook; from outta nowhere, brutal and like a no-nonsense hard smack to the coupon. It was shouty and guitary and, by now, being fed up with my Wedding Present LPs, immediately became my new favourite record. I went Pixies daft, buying Surfer Rosa and Come On Pilgrim on vinyl in one fell swoop, played them to death and waited patiently for about a year until Doolittle and all the other subsequent albums/singles/eps came along. Surfer Rosa, with it’s hubba-hubba sexy cover and more-tunes-to-the-groove ratio than their other LPs remains my favourite. And River Euphrates still remains my favourite Pixies track.

Not your normal guitar band, Pixies wrote songs differently. Their whole quiet/loud/quiet/loud schtick was adopted to great effect by Nirvana (you knew that already), but a quick flick through their back catalogue will reveal a whole host of very sweary and disturbing songs about slicing up eyeballs, broken faces (Harper again), tattooed tits and sending bloodied dresses to boyfriends in prison – subject matter that contemporaries then and now were not tackling. God only knows what they were singing about when they burst into Spanish. For the record, River Euphrates is a song about sailing down the actual River Euphrates on a giant tyre after running out of petrol somewhere on the Gaza Strip between Egypt and Israel. Nothing more, nothing less. River Euphrates is practically a quiet/loud/quiet Pixies template-by-numbers, with a breathy Kim Deal vocal struggling for space behind a loop of  3 barrre chords that musicians (pah!) like Roddy Frame would never consider putting together, and a larynx-loosening Frank Black vocal almost as big and ugly as his girth. He whispers one minute and barks like a dog the next and I love it. I used to try and play the siren-like riff by bending two strings together until my fingers bled (to paraphrase Bryan Adams) but it was only about a month ago that I discovered why my version sounded nothing like the original.

On Pixies’ Facebook page, guitarist Joey Santiago posted a picture of a beautiful Gretsch guitar (above), all silver sparkles and chrome. It belonged to Cocteau Twins’ Robin Guthrie and it was this guitar, said Joey, that he played when the band recorded River Euphrates. The distinctive siren sound was created by manipulating the guitar’s Bigsby whammy bar though a torrent of feedback from a Marshall stack, two key ingredients that I don’t have. That’ll be why my version sounded like Lonnie Donegan jamming with Lee Mavers, I reasoned. It’ll also be why, I reasoned again, Pixies rarely played River Euphrates live. Look through any Pixies bootleg list and, while it makes an appearance here and there, River Euphrates was never really a staple of the Pixies live set. Later on on Facebook, someone pointed out that the guitar Joey had pictured didn’t actually have an on-board Bigsby, which kinda spoiled the story a wee bit for me, so we’ll just have to take his word for it.

Pixies recorded two studio versions of River Euphrates. The first appeared on the b-side of their Gigantic EP. The second, shorter version was recorded by Steve Albini and appeared on Surfer Rosa. Both, like, rock.

Arch satirist Chris Morris did a Pixies parody called Motherbanger for Select magazine a few years ago. Spot on, as you’ll hear…..