It’s not often these days that a new album hits me square between the eyes demanding I reach for the repeat button again and again. Normally, by the 2nd listen, I’ve heard all I need to hear and whatever I’m playing is filed away in alphabetical order, unlikely to see the light of day ever again. Sometimes, an album will make it all the way to a week on Wednesday, as I do my best to find some so-far unheard melody or wee bit that grabs me  (Tame Impala, I’m looking at you). But, eventually, the same fate awaits all of them. Well, nearly all of them.

Land Observations is the nom de plume of James Brooks; fine artist, musician and Roman road enthusiast. Previously in Peel favourites Broadcast (they recorded 4 Peel Sessions and 4 albums in all), James has developed a very particular sound. For him it’s all clean, linear and minimal, built around layered and gently effected guitars.

Roman Roads IV-XI is a simple album. In times gone by it would have been labelled a concept album. Eight tracks of quietly pulsing motifs, inspired in part by the remnants of the Roman road at the end of James Brooks’ street, its repetitiveness and motorik Michael Rother-ish chiming guitar bring to mind the work of Vini Reilly and The Durutti Column, Rother’s Neu and all those other mid 70s German bands that the real barometers of hip opinion told you about long before now. I suppose you might call it Kosmische Musik if you were a lazy labeller.

Play it through a set of headphones and the world slows down in front of your very eyes. You lose track of time. You want to stop time. This isn’t an album you can multi-task to. Like many of you reading this, I like watching stuff like Countdown or Pointless with the sound down while I listen to my music, but you can’t do that with Roman Roads IV-XI. It requires you to stop. And listen. Tracks melt into one another. That understated, nagging motorik feel worms its way inside of you. Counter melodies make their way to the fore and new rhythms start to appear. Bits of it sound like mild-mannered drum machines battling with analogue synths. Before long you could be forgiven for thinking you’re listening to some minimal techno album or other, and not one man and his guitar (and, in keeping with the Roman theme, that’s a VI string guitar James is playing). The whole album’s quite sensational, really.

There’s a gentle ebb and flow to the whole thing, which means it’s best listened to as a whole thing. It’s not much longer than half an hour – that makes it ideal commuting and lunch break material. I’ve been cycling a lot with it. There’s no greater feeling than really going for it on a nice flat bit of road with the sun setting behind the Isle of Arran as Appian Way washes over you. So what if you hear the sound of the chain snaking its way through the sprocket and into the mix? That only adds to it. 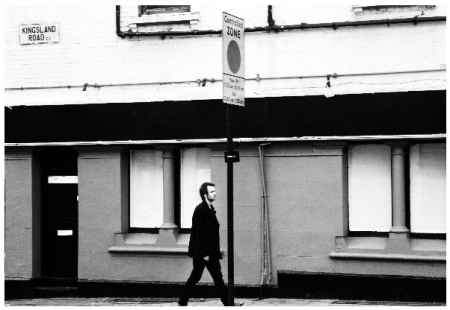 “I’ve always really admired the fragile emotion in Phil Collins’ voice, and his version of You Can’t Hurry Love is far superior to anything Motown ever put out.” Not an actual quote, but I dread the day when someone tells me something like that. Whenever I do these Six of the Best pieces I’m always a wee bit panicky in case the contributor’s choices are unexpectedly naff and I’m left with a whole different impression of that person. Thankfully, it’s unlikely James will ever need to channel his inner Slash in the quest for inspiration. A look through his Six of the Best choices reveals a set of records that, once you’ve heard Roman Roads IV-XI makes perfect sense. All the music featured is repetitive, emotive and full of soul. Guitar lines are clean and distinctive. There’s space. On one or two tracks, there’s an almost neo-classical thing going on. Much like James’ own work.

James agonised over his choices for a good few weeks before narrowing them down to his final six. For what it’s worth, if you’ve never heard any of the bands on offer, they’re as good an introduction to those artists as you’ll find.

“It’s funny how it all pretty much ends up being early influences, rather than things from 2 years ago etc.”

Can – Future Days
There are of course a number of Can songs I could have picked that I hold close, but this one seems to win out because of its mystery. Everytime I listen to it, I’m left wanting more. There is a strong sense of rhythm, yet, it still seems to retain this droney, washed-out enigma.

Listen to Future Days by Can

When I first got the Circuses And Bread LP, I so was taken with this track…..and still am – elegance and understatement that is second to none. This might sound over the top, but it calls to mind Bach and Chopin in the same sentence.
Listen to Pauline by The Durutti Column
Television – Marquee Moon
I recall reading about the album first before hearing it and thinking that this sounds like something I need to find out more about.

There’s such accomplishment, with the twin guitars and band playing as a cohesive force. Marquee Moon (the song) is such a constructivist opus in its arrangement and structure.

Listen to Marquee Moon by Television

Nick Drake – Road
I had to select a Nick Drake song. Through whatever musical exploring I have done, his music has stayed consistent ever since hearing him as a teenage art student. I do remember very vividly standing at my bedroom window and having an epiphany of how good guitars could be. Again I could have chosen a number of songs. For such a small output, there’s a lot of quality…
Listen to Road by Nick Drake
The Cure – A Forest
Just a magnificent indie guitar song. What can I say…Robert Smith is a lucky man to have written this. The space that is left within the track and on Seventeen Seconds is something else.
Listen to A Forest by The Cure
Neu – Hallogallo
I had to pick this track. It was the one that got me initially… Drive, attitude, propulsion, yet never rock. It just rolls along… A real bench-mark moment.

Listen to Hallogallo by Neu

Every Six Of the Best compilation comes in a handy RAR download file. Get James Brooks’ . New Link!

Now! Click on the album cover and go and buy a copy of Roman Roads IV-XI by Land Observations. Then tell all your friends. Go! Go! Go!

All photos courtesy of and copyright by Erika Wall

3 thoughts on “Six Of The Best – James Brooks”