So I’m looking over my 19 year-old shoulders, keepin’ the edgy with one eye whilst scanning for decent pallets of wood with the other. After a minute or so a criteria-matching pallet is duly found (“sturdy“, “wan ye could stamp oan an’ it widnae brek“), carefully dismantled (“shhh! Security guards, furfucksakes!“) and folded into the boot of my pal’s mum’s Mini Maestro before being sped out of Hysters at top speed and delivered to the back door of The Attic, venue for that night’s Nyah Fearties gig.

Nyah Fearties (pronounced Nyah Fearties) were a brilliant, brilliant 2-man folk/punk band from Lugton in Ayrshire, a place so small and insignificant that Google are still looking for it on one of their own maps, even if The Fearties did their best to put their wee toun there. They had a sound that had obvious reference points in The Pogues and The Men They Couldn’t Hang, but there was a rough and raggedyarsedness to their sound, more no-fi than lo-fi, that made MacGowan and co. sound like a slick jazz funk band from 1982 by comparison. The Fearties were very parochial. Not for them a Scottishness that reeked of purple heather and proud images of Edinburgh Castle, they sang of what they knew. Lugton Junction. Bible John. Sawney Bean. Red Kola. A Sair Erse.

At The Attic, the two Wiseman Brothers, Davy and Steven, thrashed the daylights out of their acoustic 6 strings and bass guitars, not so much playing them as wrestling with them as though they were man-eating pythons. They kicked the shit out of that freshly-borrowed pallet and by then end of the gig it was in pieces smaller than we’d made when trying to get it into the car. They sounded like the apocalypse. Wild-eyed and feral, they participated in an hour and a half of non-stop call and response cris de guerre, sweating like boxers in the final round yet still standing upright, as if held vertical by magic. And so were we. Fuelled on £5 Bob Marleys – an ice bucket filled with a shot of every spirit and diluted to taste with fruit juice and so called because, as the barman helpfully pointed out, “you’ll wake up black and dead“, we thrashed about in the wee area in front of what loosely passed as the stage. Bang in the middle of this area was a spiral staircase. And bang! At one point or other I chicken-danced myself into it and split my head in two. Didn’t notice a thing until the next morning when I did indeed wake up black and dead and very hungover, just in time for the half 7 start in Safeway, dried blood crusted on my forehead and a splintered plank of wood from our pallet lying next to my bed. Really.

Red Kola (pronounced Rid Kola) is one of The Fearties best. Written as an anthem to Curries’ Special Kola (not brown, but red, and teeth-rottin’ tasty) as well as a tongue in cheek response to REM’s Orange Crush and as a metaphorical warning of the Americanisation of the UK, it’s a breathless, clatterin’ rant and a half:

They swallowed up oor land in the name o’ Geordie Bush

Lugton Junction (pronounced Lugton Junction) is a tirade against British Rail. From the opening scaffolding poles and found-sound bashing that apes the sound of ancient steamtrains passing at high speed, to the slide guitar as train whistle, to the we’re no’ standin’ fur this vocals, it’s what you could call one of The Fearties’ Greatest Hits; 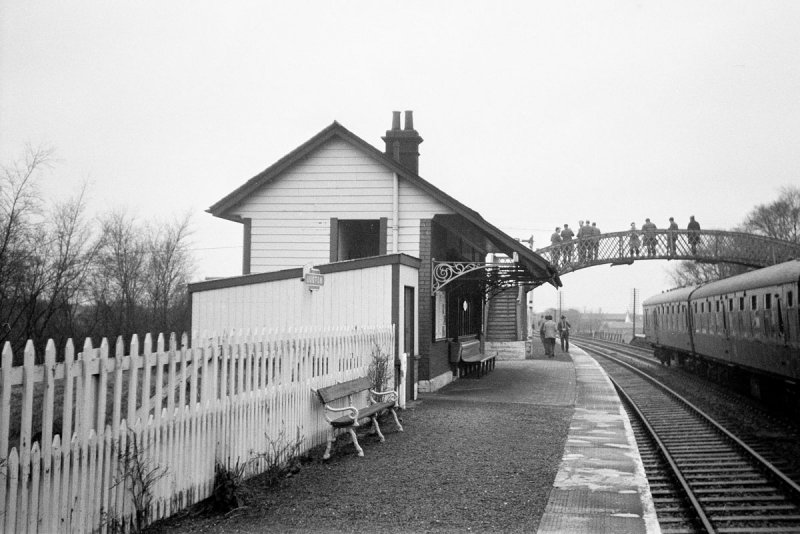 A year or so after The Attic gig and me and a pal are on the bus to Glasgow. It stops at Lugton and who gets on but none other than Davy Wisemen (he cannae get a train, remember?) “A’right boys!” He sits down and entertains us and everyone else on the bus (he has a rather volumatic burr to his voice) with stories about anything and everything. He draws us a map of Arran, showing us where The Fearties are playing in a week or so. Then we’re in Buchanan Street bus station and he’s off to who knows where with a genuinely cheery cheerio. “Did embdy ever chin you about that pallet?” No, Davy, but I couldnae explain to my mum how a broken plank of wood had ended up in my bedroom.

5 thoughts on “Lugton Calling To The Faraway Towns”