It’s midway through the year and round about now the movers, shakers and self-appointed hipsters in the music press like to sort out the wheat from the chaff in an early attempt to predict what will become the all important ‘Album of the Year‘, just so they can say “told you so!” in December. It’s ridiculous to even try and suggest such a  thing – one man’s meat is another’s poison and all that, and who really cares anyway?, but for what it’s worth,  if you were to ask me, an early contender for such a title would surely go to solo Super Furry Gruff Rhys for his Hotel Shampoo LP.

Had it been released under the Super Furry Animals banner it would have been frothed over by superlative-filled foaming-mouthed sychophants falling over themselves in praise of yet another Super Furry masterpiece, but I can’t help thinking that it somewhat crept under the radar. Investigate it now – here‘s the opening track Shark Ridden Waters. Seagull noises and bursts of foreign TV shows doused with a liberal sprinkling of Gruff Rhys melody, all underpinned by the most fruggable bassline since Peter, Bjorn & John’s Young Folks.  Good, eh? And that wee fade out at the end, the ‘there’s no use cryin’, no use tellin’ me how much you’ve changed‘  part gets me every time. Sounds like it’s been sampled from something too, but I can’t place it. Any ideas? Oh, and talking of samples…….

Super Furry Animals’ The Man Don’t Give A Fuck takes the sweary part from Steely Dan‘s Showbiz Kids, loops it over 50 times and creates a fantastic record full of fuzz guitars, sleigh bells, Beach Boys-style doo-wop backing vocals and Glitter Band stomping drums that builds and builds and builds until it falls spectacularly in on itself. But you knew that already. You may also know that it was recorded at the same sessions that produced the bulk of debut LP Fuzzy Logic and was earmarked as a b-side (only a b-side!!) to If You Don’t Want Me To Destroy You. Failing to get sample clearance in time put the kybosh on that idea, however, but thankfully the SFA persevered until Steely Dan gave them the OK to release it as a standalone single – in return for 95% of the track’s royalties, an arrangement Gruff Rhys was more than happy with, given that a record featuring such nonchalant use of the ‘f-word would hardly trouble the playlists of the nation’s radio stations. And just in case it did somehow set the charts alight, the band deleted the single one week after its release, making it instantly collectable to those (like me) who care about such trivialities. 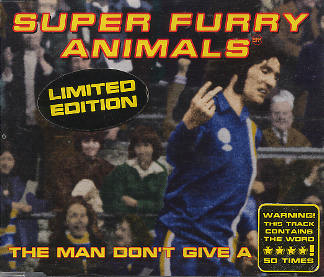 The sleeve of The Man Don’t Give A Fuck featured a picture of Cardiff City’s Robin Friday flicking the V’s to the Luton Town goalie of the day (see full picture below). Friday seems to have been cut from the same cloth as George Best – at his peak in the mid ’70s Friday was a free-scoring player both on and off the pitch, and was just as famous for his smoking, drinking and drugging exploits as he was for his womanising. A bit like any number of modern day players really, but without the kiss-and-tells in the News Of The World. Or, in Rio Ferdinand’s case, the free-scoring on the pitch part. Allegedly.

Robin Friday was a nonconformist and lived every second of his life with an intensity that burned for all to see. Friday not only flicked V signs at goalies who stood no chance against his prowess but he flicked V signs at anyone who tried to tame him. He was the superstar of the suburbs, the one who made George Best look like a lightweight.

Indeed. He once kicked Mark Lawrenson in the face, something that many of you here would no doubt jump at the chance of doing too. Perhaps that’s why Lawrenson now speaks in that ridiculous singsong school girly voice? Who knows, but surely after reading the sleevenotes above, the question on everyone’s minds is now, “How much of that did Guigsy write?” 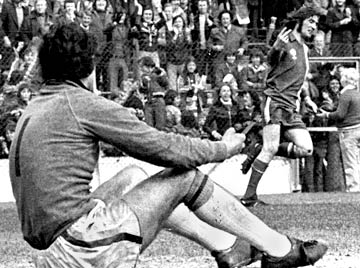 No bonus tracks as such. The 2 additional remixes on the MDGAF single were rather lacklustre beats ‘n bangs ‘n clatters mixes that just about survived one whole play before being filed away for 15 years. I’ve just played them for the 2nd time ever whilst writing this and honestly, you never need to hear them. But I’ve featured loads of Super Furry Animals before –  I’m particularly proud of the hidden tracks article I wrote a couple of years ago. For anything else, use the ‘Search‘ facility!