I curse the day I named this website philspector.com instead of plainorpan.com, but there’s nothing much I can do about that now. I kinda like the fact that the odd misguided soul wanders over here expecting to find Phil’s latest gossip from behind whichever bars he’s behind. I’m sure if they looked around before they left they’d find an interesting article and some decent music to content themselves with. I’ve long been a fan of Phil Spector and his terrifically over the top Wall Of Sound productions on records by The Ronettes, The Crystals, Darlene Love, etc etc…..I could go on, but you know them all yourself. 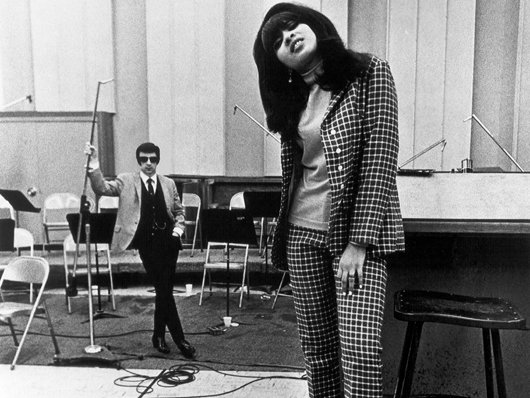 Phil Spector’s music gets played fairly regularly round here. Two and a half minute pocket symphonies of teenage angst, unrequited love, cheating and heartbreak that rush past in a crack of a castanet and a tumble of toms, soaked in enough reverb to drown in. Phil Spector knew what he was doing right enough. Thinking outside the box, he was a true production maverick, double and triple-tracking everything, re-taking and re-doing seemingly perfect takes, pushing the artists to their very outer limits – read/hear here if you haven’t already. And the instrumentation! Wow! Big on rhythm, big on beat, he used everything but the kitchen sink on these records (although they say if you listen closely to River Deep, Mountain High, the sound you hear in the background of the chorus actually is the studio’s kitchen sink being employed as some rudimentary rhythm machine or other.)

Hey Spector! You shoulda listened to these dating tips from the Shangri-La’s!

Or perhaps not. But you get the idea. Anyway, Phil Spector spawned a whole host of copycats and wannabe soundalikes and I’ve built up quite a collection of them. You’ll be well aware of The Shangri-La’s, who, for me at least, ARE teenage angst personified.  They weren’t averse to the odd Spectoresque sweeping string and clattering castanet – have a listen to The Dum Dum Ditty. See? Then I Kissed Him by any other name, no? But what about The Girlfriends? The Bees and The Honey? Pussycats? The Whyte Boots? The Geminis? The Bitter Sweets? Each and every one are just as thrilling and just as vital as their more well-known rivals.  Much like the music Lenny Kaye compiled for his Nuggets series, these bands and singers were less the one hit wonder and more the no-hit wonder and in common with Nuggets groups, many of the vocalists would achieve success later on in different groups.

The Girlfriends featured the young Darlene Wright. By the time she was married she was known as Darlene Love and sang on many of Spector’s records. She is responsible for the vocals on He’s A Rebel,  Christmas (Baby Please Come Home), Today I Met The Boy I’m Gonna Marry and a whole lot of other (often uncredited) stuff that’s seeped from the airwaves, out into the ether and quietly planted it’s melodic seed in your head. I bet right now you’re singing that Christmas song to yourself. I am. Before working with Spector, Darlene and her vocal group The Girlfriends  recorded My One And Only Jimmy Boy, a total rush of Da Doo Ron Ron handclaps, sleigh bells and tumbling toms.

Darlene had a varied career and went on to work with the hip – John Phillips’ John, Wolfking of LA album and the happening – Elvis – you can see her in the background of the ‘That’s The Way It Is‘ 70s tour film. She also played Danny Glover’s wife in the Lethal Weapons films. But you knew that already.

The Honey and The Bees are a strange proposition. Seemingly sometimes referred to as  Honey and the Bees, sometimes referred to as The Honeybees, it’s easier to find the recipe for Coca Cola online than it is to find any meaningful information about them. I have been able to glean that they were essentially The Cookies under a different name – they also recorded as The Cinderellas and The Palisades – and were essentially one band masquerading as four! Lead vocals on this, a cover of Dusty Springfield’s Some of Your Lovin‘ are by Barbara Alston, who later found fame as vocalist in Spector’s The Crystals. Y’see, in the same way that Wigan Athletic plucked Kilmarnock FC’s goal machine Conor Sammon from the relative obscurity of the SPL to the dizzy heights of, er, the bottom of the English Premier League (“The best league in the world!”  – (C) the English media), Phil looked on these unknown groups as the fertile breeding ground for his Wall Of Sound productions, enticing the best players with hollow promises of fame, fame, fatal fame and a shot at the big time. Nothing much changes really.

The Whyte Boots are proof of that. Lori Burton and Pam Sawyer were two Brill Building staff writers who came up with the idea of creating a fictional group to front the street-tough, attitude-heavy songs they were writing. Cue The Whyte Boots. Their 1967 record Nightmare, all doom-goth descending piano and heartbeat drums, caused a bit of a furore at the time.

“No boy’s worth the trouble I’m in!” they heavy breath at the start and you know you’re in for the melodramatic ride of your life…..

“You can beat her, you can win!Get her, get her, push her to the ground!” it goes, until it’s obvious this is one catfight that’s got out of hand. The screams! The “What should I do? “Run! Run!” call and response vocals!  The screaming police sirens!  The way the song drops at the end when you realise the girl’s dead! Wow! Not even the Shangri-la’s went that far.

Mecury Records liked Lori Burton so much they let her record a whole album’s worth of this stuff. It’s called Breakout and has been described as “a classic New York pop-soul stomper of an album.” It is, it is.

I could write about this stuff all day…here’s a few other records that are low on information but high on  melodrama and angst.

The Bitter Sweets – What A Lonely Way To Start The Summertime

The Geminis – A Friend Of Mine

……and keeping the lipstick lacquered and the heartbreaks a-happenin’ today we have Cults, a terrific Brooklyn-based (of course) band who with You Know What I Mean have released what will absolutely, hands down, be my favourite single of 2011. I don’t tend to feature new music on here much, as things tend to be removed tout de suite by the DMCA (I know Drew at Acrosss The Kitchen Table had You Know What I Mean removed  last week), so I’ll point you in the direction of their You Know What I Mean Soundcloud. You can’t download it, but you will want to buy it after listening. Believe me. I’m now off out in the hope I’ll pick up one of the ltd edition 7″s they’re releasing as part of Record Store Day. Form an orderly queue, please.