Keeping It Peel is the brainchild of the good persons over at Football And Music. To honour the memory of the late great John Peel, Football And Music has decreed October the 25th “a sort of John Peel Day, but for bloggers.” Like many of the blogs listed on the Blogroll down there on the right, I’m in. It seems the right thing to do – as a music-obsessed teenager I listened religiously, finger sweating on the ‘pause’ button of my music centre waiting patiently to catch and magnetise some of those brilliantly weird and parent-bothering new sounds floating through the ether and onto my crappy cheap Boots C90s. I quickly developed the skill of being able to depress the ‘pause’ button in that wee space just between JP stopping talking and the record starting. In hindsight, I wish I’d been less skillful, as I’d love to listen back to those old tapes and be able to hear some of what he was saying. I still have some of the tapes up the loft. I should really get them down and have a wade through them sometime. Y’know, without John  Peel etc etc blah blah blah…

So, what to post? Much of the stuff I enjoyed on the Peel Show (roughly about 3 records an hour if I’m being honest) ended up being the stuff recorded by my future favourite bands. You know who they are, they’re the same as yours. I could be wilfully obscure or wilfully elitist, but in keeping with the unpretentious nature of the band I’ve chosen to feature, I won’t. The ubiquitous Fall may be forever linked-uh with John Peel, but to me The Wedding Present are just as big a deal – he gave them plenty of opportunity to record sessions for his show and they seemed to appreciated the platform he afforded them. Peel’s listeners clearly appreciated them too – they had a massive 45 tracks included throughout the years in Peel’s Festive 50s, a feat only bettered by, aye, The Fall.  And besides, David Gedge is the nicest pop star I’ve ever met – you can read all about it here. 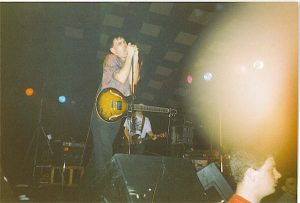 Their session from the 24th May 1988 is my favourite Wedding Present Peel Session. This is the sound of a band no longe ramshacklingly scrubbing tinny guitars with brillo pads and replaying the reults through cheap amplifiers. This is the sound of a band who’ve managed to recreate their favourite sounds of alt. America in their live set – low rumbling bass that sounds as if it’s balls have dropped, meatier guitars played through proper amplifiers; tight, taut, tense, terrific. They would later go on to replicate this sound on their masterpiece LP, major label debut Bizarro (aye, forget the George Best album. No tears now.)

The 24.5.88 session is almost the perfect session. As was often the norm at these sessions, the band recorded 3 brand spanking new songs and one sparkling cover version. Nowadays, those three spanking new songs would be all over the internet the moment the last screech of feedback had died out and would have been digested, discussed and dissected by chat boards from Bradford to Berlin and beyond before breakfast. In pre-internet days, the C90 and your ‘pause’ button were your only friends. Fearful of taking a toilet break (Misty In Roots was my calling card every time), you captured what you could and replayed it the next day and more until the tape started to sound a bit wonky. Over time of course, this only added to the charm of a clandestinely captured Peel Session. It was often something of a shock to hear the ‘new’ song for the first time on the band’s album and finds that it didn’t slow down and speed up during the last chorus. Kids today with their mp3s, huh? They don’t know what they were missing. The 4 tracks I captured in all their hissy glory?

Take Me, I’m Yours was my favourite. Over 8 minutes long, it featured an extended outro complete with Status Quo riffing, not the sort of thing expected from yer Wedding Present at all. The band must’ve been in on some Quo-related in-joke, for on Happy Birthday Gedge gleeefully shouts, “Status Quo, 25 years in the business!” and the band all cheer. It still tickles me today. The session tracks above are taken from my shiny, pristine Wedding Present Peel Sessions Box Set. Free of any FM hiss and missed guitar riffs they (cough…ahem) Present the Weddoes in the best possible way. I’m amazed that the Marilyn Monroe intro to Happy Birthday has been retained. I’d’ve thought that would’ve cost an arm and a leg to get the clearance for, perhaps even more than the expected return after selling however many copies of the box set they expected to sell. This music, after all, was recorded by a band who once sold a t-shirt proudly proclaiming in big black letters, ‘All The Songs Sound The Same‘. Who wants to sit through 12 John Peel Sessions over 6CDs in the one sitting? Only a fool. But a fool with particularly good taste. 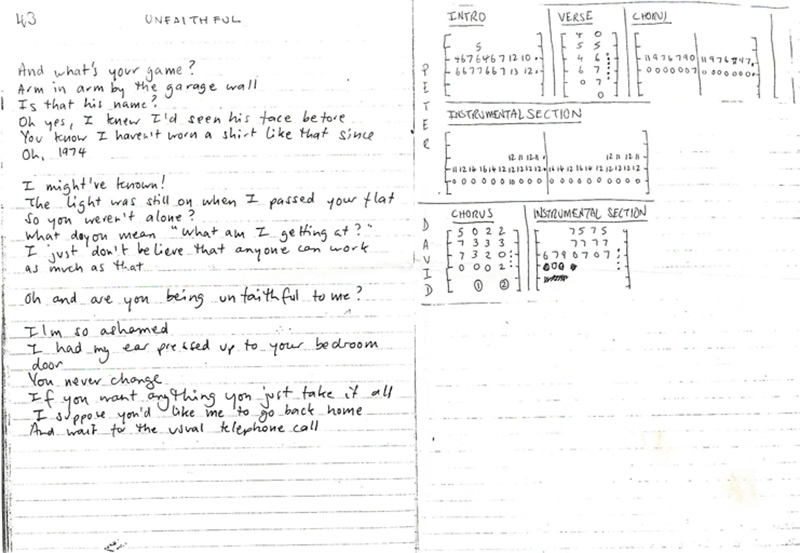 The official Wedding Present website seems to be no more is here, and this excellent fan site has all you need and more. The image above, of David Gedge’s handwritten lyrics and guitar chords for Unfaithful and that shot of the band at the Barrowlands were taken from there. Thanks, Something And Nothing website!

I used to have a few complete Peel Shows from the late 60s and early 70s which I’d have loved to make available for download here, but following the disaster that was the Great Hard Drive Crash of 2007, this is no longer possible. Instead, I offer you this – the complete 1971 David Bowie Peel Session. Some of this (crucially, not all of it) made it onto the Bowie At The Beeb CD set a few years back. Plenty of chat from Peel (and Bowie for that matter). Get it while you can.