Funk brothers separated at birth? Or just Ike Turner being a cheeky liberator of one of Sly Stone’s grooviest riffs? Sly‘s Sing a Simple Song came out in 1969 on the Stand! album. One year later Ike & Tina Turner released The Hunter, a downright gutteral blues/soul/ r’n’ b stomper of a record. The cover of the album sets the tone – Ike is wearing his best Beatles wig and Tina is dressed as some sort of Amazonian warrior princess. It’s even better between the grooves – it wails, moans, bleeds and sounds like something the cat dragged in. You really should take the time to find it at. You’ll like it. There’s a smokin’ version of Baby, What Do You Want Me To Do (made famous by Elvis in the ’68 Comeback Special) There’s an aching, bluesy version of You Don’t Love Me (later made famous in a reggae style by Dawn Penn) And there’s this – Bold Soul Sister. Clearly based on Sly Stone’s Sing a Simple Song or blatant steal? You decide here. 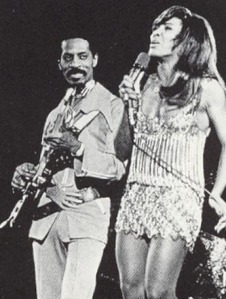 To be clear – this isn’t the big haired, private-dancing-like-she’s-peed-herself Tina Turner of 80s fame. Oh no. This is the down-trodden, beaten-up wife of Ike; misogynistic rock n roller, racketeer and  writer of Rocket 88 (generally considered to the very first rock n roll record) In the studio at least, Ike brought out the best in Tina. Her work from the 60s is as exciting as anything by Aretha, The Supremes or Carla Thomas. Why she’s never mentioned up there with the greats is a bit of a mystery to me. I love her output from this era. Listen to Finger Poppin’ – a brass-driven mod stomper of a record. Now tell me Tina Turner is rubbish.

Tina clearly knew her place in the marital home.

Another wayward trigger-happy drug-crazy hero of mine is Sly Stone. There was a time in the early 90s when I couldn’t get enough of his music. Sly for breakfast. Sly compilation on the Walkman for the walk to work. Sly while cooking. Sly before bed. I was Sly Stoned out of my tiny little white boy mind. Where had this music been all my life? I love the stories, true or not, about how, when making the There’s a Riot Goin’ On album he’d take all his female hangers-on and companions back to the studio and allow them to sing backing vocals on the record in return for carnal delights. Of course, Sly would erase the vocals as soon as he’d had his way. Well, it was 1971. As female after female passed from recording booth to bedroom to door, the erased tapes became so saturated that the final mastered version sounds weak, thin and weedy compared to the full-fat funk productions the Family Stone had released in the past. And that’s the reason they’ll ever be able to come up with one of those Remastered Deluxe Editions for There’s a Riot Goin’ On. But you probably knew that already.

Sing a Simple Song is a fantastic single. It starts with that cheesegrater-thin guitar riff, the Yeah! Yeah! Yeah! Yeah! piercing female vocal (Sly’s sister I think) comes in and the whole thing takes off somewhere far above the clouds. The Family Stone lock into the one chord funk riff and male and female voices call and respond across the top of the whole thing. (I particularly like the bassy Do-Ray-Mi-Fa-So-La-Te-Do bit.) By this point poor wee Ike Turner has flames coming off his pencil as he frantically tries to write notes on the whole thing. As you know by now, he kept the one chord funk part and turned it into Bold Soul Sister. Talent borrow genius steals and all that.

Here‘s a bonus Sly Stone track. Sex Machine (nothing like James Brown’s) is another one chord groovathon, wah-wah’d to within an inch of one hell of a groovy death. At just under 14 minutes long it’s no quick fix. Just the right length for…….well, it’s not called that for nothing. Of course, white men can do it at least twice in the time it takes the song to finish. But you knew that already.

What’s love got to do with it, eh?

2 thoughts on “Stoned Out Of My Mind”