I’d been meaning to re-post this excellent Beatles show a couple of weeks ago when the world was going Beatles mad and I re-posted the best of the Beatles posts I’d done, but somehow I forgot to upload it at the time and I thought, “Ach, I’ll do it later…” Spurred on by a request from reader FC3 (as well as other requests in the past) I’m re-posting it here, right now, today. The original files were deleted by persons unknown during the great DMCA clampdown of November 08. Don’t be surprised if the new files are also removed by the internet police. Act fast! What follows is the original post from November 2007  along with newly updated download links and an MP3 sample.

So sayeth John Lennon. I can’t believe I haven’t posted anything Beatles-related at all until now. This post more than makes up for it. The music contained herein is cracking. What makes it all the more amazing is that this recording is of a radio show and is over 40 years old. It’s amazing to think these recordings exist, let alone in good quality. God knows who originally recorded it, or how they recorded it, but somehow they did, and thanks to the wonders of the internet, it’s all here. First though, the history part.

In 1963, as a live phenomenon, The Beatles were at the top of their game. Their years of playing extended sets in Hamburg had taught them how to handle a crowd. Their own fantastic songwriting talent was emerging and many of these songs were yet to be committed to vinyl. In a couple of years time they would be a spent force on the live stage. Limitations in their equipment couldn’t match the increasingly bigger venues the band were playing. This show was recorded for Swedish Radio at Karplan Studios in Stockholm on October 24th 1963. It captures the Beatles playing their early 60s set, drawing on a mixture of originals and covers. From Paul’s “2, 3, 4″ count-in onwards, this set sounds like proto-punk. The playing is spot-on. The vocal harmonies are tight and Ringo’s backeat holds it all together. There’s a John one (From Me To You), a Paul one (I Saw Her Standing There), a George one (Roll Over Beethoven), a fast one (Money), a slow one (You Really Got A Hold On Me) and all the big hits (She Loves You, Twist & Shout). And it’s all in crystal clear high fidelity mp3 (!)

Hans Westman was the studio engineer for Swedish radio. “The worst recordings I’ve ever made,” he said. “Totally chaotic. No time for rehearsals.” The studio wasn’t best equipped for recording a ‘beat group’ and there were problems overcoming the UK plugs on the Vox amps. But once sorted, The Beatles simply plugged in and played. Westman couldn’t apologise enough for his poor sound, but Lennon loved this recording. “We love distortion!“ Not long before he died in1980 he said that these were the best live recordings The Beatles ever made.  And who can argue?

You need this. It’s brilliant. Try before you buy? Here‘s an mp3 of Twist & Shout. The entire show is available here as a rar file., from me to you (arf).

(Above)  back cover art (right-click and save) 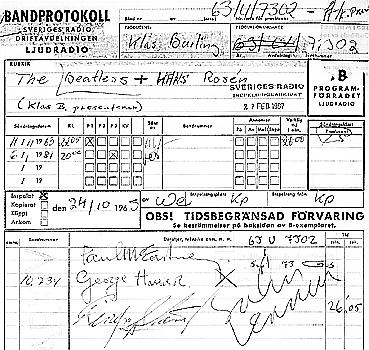 3 thoughts on “Requests, Repeats and a Rockin’ Ringo Starr”

My Tweets
Join 1,021 other followers