I’ve been meaning to mention that Stone Roses reissue from a few weeks back. Whatever you think of them, I have to tell you that the remastered album sounds absolutely magic. It’s night and day compared to the weak, tinny excuse of a CD that didn’t even come out when the album was initially released. The new version sounds like a jet plane taking off in your living room. I can only guess what it must sound like through a decent pair of Senheissers after a jazz cigarette. If I had the money I’d have sprung for the complete nuts ‘n bolts b-sides ‘n all release in the John Squire artwork adorned canvas 12″ box. If everything sounds as good as the mastering on the album it’ll be well worth it, and the rest. Until I have the money, bittorrent will be my best friend…

I’m sure they’re taken from one of those Guitar Hero-type video games (maybe Rock Band?) but I have 3 seperate tracks and one amalgamated track featuring vocals, guitar and piano (with a bit of bass bleeding through now and again). They sound fantastic. The bassline alone is crying out for some bedroom nerd to remix it into oblivion. In fact, if you had the time to combine the bass parts with the drum track, you’d have yourself the perfect backing track if you fancy a spot of bedroom hip hop.

Squire’s isolated guitar part sounds fairly easy to play, although the ‘track’ I have sounds like 2 guitar tracks added together – one fat sounding dropped D Les Paul doing all the slide parts and a thinner sounding guitar playing all the clipped chords and those top-of-the-scale notes. Find my tab from the other post and jam along. That’s what I’ve been doing this morning instead of the ironing! 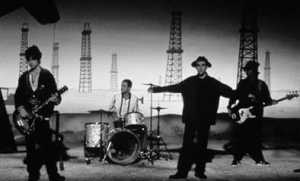 Remember to get Audacity for the full Phil Spector four track bedroom production effect! And try not to make a mess in yer Calvins, McMark.

The long-forgotten live-in-the-studio version of Love Spreads that made it’s only appearance on the original 1995 Help album. No one ever mentions it but this version is immense. Features a nice piano ‘n drums break down not on the single version. Get it!