On constant rotation chez moi this week has been the new long player from the Super Furry Animals. It’s called Dark Days/Light Years and it’s a belter. But you probably knew that. So far ahead of everyone else in terms of originality and imagination, I would say that the Super Furry Animals are currently the Best Band on the Planet. 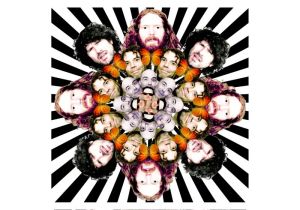 Except they’re clearly not on this planet. To the uninitiated, on the face of it the Super Furries are just another generic indie guitar band. But look closer. Are there any other groups who can go seamlessly from pastoral folk to fuzzed guitar psychedelia to nose bleeding Belgian hardcore-apeing techno to native language singalongs? Effortlessly? Often in the one song? Nope. Of course not. So that’s settled. The Super Furry Animals are the Best Band (almost) on the Planet.

The band clearly stockpile songs and only release them when the stars are aligned and the vibe is right. ‘Inconvenience‘ from the new album sounds like Golden Retriever from their Phantom Power album, only with better lyrics. Gruff Rhys has said it was an old song looking for the right album. Looks like it found it. Even the slow songs on this album are fast, he’s said. And they are. But enough of that. If you’re a fan of SFA you’vre probably got the album by now. If you’re sitting on the fence, get off it now and hop over to any good music retailer, physical or online and take a punt. You won’t regret it. If you’re one of those folk who say you don’t like them (and there can’t be that many people), click on the link below and for free you can download the band’s Peel Session broadcast from John Peel’s house on 12th July 2001. Then get yourself over to any decent music retailer etc etc… 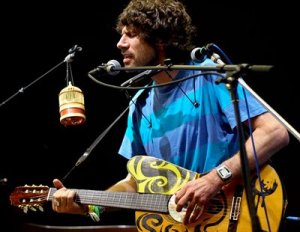 The session in question that was broadcast from Peel Acres is a cracker. In front of a small audience they go through 3 tracks from the Rings Around The World album that they were promoting at the time. They also play a Welsh language track that featured on that year’s Welsh language album Mwyng. But the highlight for me is the first track. Written on the way down to the session, reveals Gruff, ‘Zoom!‘ would not make it’s official appearance until 2005’s criminally under-rated ‘Love Kraft’ album. Another old song looking for the right album.

This session is as good an introduction to the Super Furries as anyone needs. Opening track ‘Zoom!‘ is a slow-burning builder of a song; a nice combination of acoustic guitars and Pink Floyd synths. By the time it had made it onto ‘Love Kraft’ it was twice as long and had swimming pool splashes, trumpets and all sorts of sonic embellishments on top, but the version here is pretty much complete from the off. Second track, ‘Fragile Happiness’ is worth hearing purely for the way mumbling Gruff sings “We’ll go to Miami“. It also sounds uncanilly like fellow pastoral folkies Gorkys Zygotic Mynci (seek them out if you’ve never heard them). With my ignorance of the Welsh language I have absolutely no idea what is being sung on ‘Nythod Cacwm’, but it’s that melodic you can sing along without needing to know the words anyway. Sevem minute long lighters-in-the-air power ballad ‘Run! Christian, Run!‘ follows and the whole session finishes with the excellent ‘A Touch Sensitive’. Sadly, not a cover of the Fall track (and given the setting, you could be forgiven for thinking that), it’s a hypnotic instrumental that sounds like the theme to some long lost sci-fi spy film. Big bass line, bubbling analogue synths, an echoey, dubby piano riff and Krautrock drums. Yep. Super Furry Animals. Hands down Best Band (almost) on the Planet.

1 thought on “Peel Slowly And See”