JC over at the Vinyl Villain has, like many of us in the blogosphere recently, been the target of the DMCA. Quite rightly I suppose, the DMCA have the authority to remove music files and shut your blog down if you are clearly flouting copyright laws by sharing copyrighted material. This very blog nearly shut down over Christmas due to the severity of attention I was receiving, but thankfully this attention has subsided over the past few months. JC on the other hand is being targetted fairly frequently these days. On one occassion, a track by Paul Haig was removed without him knowing, despite the fact that the track in question was owned by the artist himself and not the record company as the DMCA thought. A couple of quick emails back and forwards to Paul Haig’s management later and JC was able to re-post the track. You can read more about it here. In Mr Haig’s honour, JC has asked the blogging community to stand as one in solidarity, with a cheeky Ferguson-McGregor two-fingered salute to any nit-picking internet fascists who may be lurking. Aye! You can count me in! Here at Plain Or Pan?,  Monday 6th April 2009 is officially Paul Haig Day. 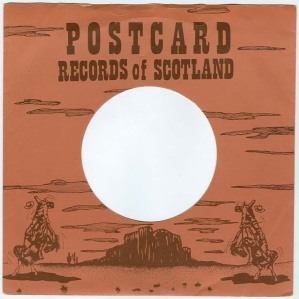 My own contribution to the cause is a track by Paul’s first band, Josef K. Signed to Postcard Records, they were like Orange Juice’s runny-nosed wee brother. They sounded like the type of band who would come home after the first day at school with both knees out of their new trousers and no leather left on the toes of their Clarks Commandos. Their itchy, scratchy and claustrophobic cheese wire thin guitar lines and elastic band basslines meant they were the epitome of post punk. A thousand and one fringe (meaning both haircut and success) guitar bands owe them a huge debt, whether they realise it or not.

A couple of years ago, Domino Records released ‘Entymology‘, a compilation of the band’s Postcard and Belgian label Les Disques Du Crepuscules releases. This was my first introduction to Josef K. If you’ve never heard them before, read on. Mr Kapranos, you can shuffle off quietly to your rehearsal room again.

Sorry For Laughing was the band’s 4th single. Released 28 years ago (!!!) this month it failed to chart anywhere, yet to me it sounds like the definitive Josef K record. Slightly shambolic and out of tune, yet heartfelt and soulful. There’s a nice tambourine jangling about in the background. The Wedding Present were clearly taking notes on how to play those brillo pad scrubbed barre chords too. Hear it here.

lyrics as they appeared in a Postcard Records leaflet

Sorry For Laughing has been covered quite a few times, most notably by 80s Germanic stylistas Propaganda. Their version is the 80s – glacial synths, machine-like Teutonic vocals, bangs! Crashes! Zang tum tum! I’ve mentioned French covers artists Nouvelle Vague elsewhere before. Their version is lovely, sounding like The Cardigans duetting with Nico on happy pills. Glasgow’s own 1990s have done a version too, but their go at it remains elusive for now. Enjoy the tracks and remember to support the artists who made them etc etc blah blah blah…..