…or the KLF to yer average music fan. Or the Justified Ancients of Mu-Mu. Or The JAMS. Or King Boy D and Rockman Rock. Or just plain old Bill Drummond and Jimmy Cauty to their mums. We’ll stick to the KLF for now. It’s no coincidence that their full unabbreviated moniker advocated freedom for all. Their debut album, ‘1987 (What The Fuck Is Going On?)’ was a fantastic exercise in cheeky and downright blatant plagiarism from a wide range of unlikely sources.

They may be hip these days (or are they not again, I don’t know), but in 1987 Abba were far, far, far from hip. So the KLF took a large slice of ‘Dancing Queen’, added some scratching, some rapping and what sounds like a demented duck on lead vocals, looped it about a bit and named it ‘The Queen and I’.  Nowadays it sounds about as revolutionary as PJ & Duncan, but at the time the music press loved it. “Have you ever met Abba?” one of them asks near the end. And with a knowing wink the other replies, “I’d love to meet Abba. They’re one of my favourite groups.” As rave reviews for the LP filtered across the North Sea to Sweden, Abba and their lawyers got hold of the track and were a wee bit upset. “Cease and desist!” they said. “And while you’re at it, destroy all remaining copies of the album.” Bill and Jimmy set off an a Scandinavian voyage in the hope of meeting one of their favourite groups. They dumped some of the unsold albums overboard. To this day they’re at the bottom of the North Sea. Mint copies fetch £500+ on eBay, but I’m not sure how much you’d get if you went diving for one of these sunken treasures. According to Wiki, some other copies of the album were given to a prostitute who looked a wee bit like Agnetha. Of the copies that remained, the band took them to Abba’s management in the hope that they could get them to change their mind. They didn’t, and the album has been a thing of file-sharing mystery ever since.

One track, ‘All You Need Is Love’ was released as a one-sided 12″ single and sampled The Beatles, Sam Fox and some kids singing Ring A Ring A Roses. Bill and Jimmy rapped like a very Scottish ‘Licensed To Ill’-era Beastie Boys. It sounds weird and a wee bit dated. The album version was even weirder, featuring a random Top Of The Pops rundown of the charts. What the fuck was going on indeed.

Talking of the Beastie Boys…..no strangers to sampling themselves, they took huge chunks out of The Beatles back catalogue for the track, ‘The Sounds Of Science’ on ‘Pauls Boutique’. Thankfully, this was released in the days before sample clearance, cos nowadays it would never be allowed. They also nicked bits of ‘I’m Down’, and right up until the last second their own track of the same name was due to appear on ‘Licensed To Ill’, their sneery, snotty Led Zeppelin-pillaging debut. You can get it on the ‘Original Ill’ bootleg or you can get it here. 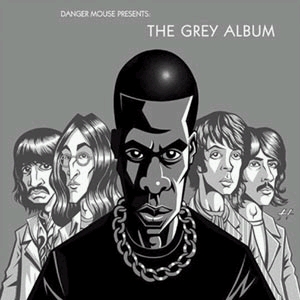 More recently (and more famously) Danger Mouse took his copy of ‘The White Album’ and Jay Z‘s ‘The Black Album’, got some sellotape, added some big beats and created ‘The Grey Album’. EMI ceased and desisted it quicker than you could say “Everybody’s Got Something To Hide Except For Me And My Monkey” (aye, it took them a while) and like the KLF before them the album filtered onto file sharing immortality. To be honest, I don’t like it all that much. But then, I don’t really like Jay Z. Some of it sounds a bit contrived to these ears. But I do like this track. Jay Z‘s ’99 Problems’ and The Beatles ‘Helter Skelter’ battle it out for supremacy. Being as he is laid up in bed with a couple of broken ribs, Noel Gallagher is unavailable for comment, but I think it’s a cracker. No pun intended.

*Footnote. Does anyone know the name of the Cypress Hill track that samples Paul McCartney’s “Wooo-ooo’s” from the opening bars of ‘Your Mother Should Know’? I know it’s out there somewhere, but I cannae find it. Help!

1 thought on “Sampling The Beatles and the Kopyright Liberation Front…”