Another post that shows my age. If The Best of Blondie was one of the first albums I bought, amongst the first 7″ singles I bought were Gangsters, Rat Race and Stereotype by The Specials. I used to get £1 every Saturday and I’d be straight down to John Menzies for whatever had caught my eye on Top Of The Pops on the Thursday night. I even had enough change left over for a penny chew. I came to regret this in later life when I started getting fillings in my teeth, but not as much as the twang of regret I get everytime I think about the time I gave my singles collection to the BB jumble sale. Baggy Trousers gone. Stand & Deliver gone. Swords Of A Thousand Men gone. D’oh. 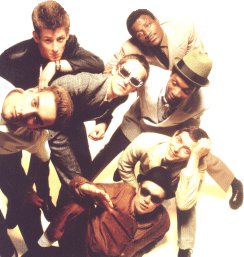 The Specials recorded 4 sessions for John Peel. The first (23.5.79) was available for a while. Try eBay if you really need it. Or ask me nicely…

The other sessions remain unreleased but you can find the three tracks recorded for the 3rd session below. Recorded almost exactly 27 years ago on the 29th October 1980, the jewel in the crown here is undoubtedly the version of ‘Stereotype’. The single version is sung in 3rd person – “He’s just a stereotype, he drinks his age in pints etc etc,” but in this run through, Terry Hall sings a different introduction and sings in first person – “I’m just a stereotype, etc etc”. Now. Bob Dylan fans get themselves all in a lather over this kind of thing. Specials fans probably don’t, but the Peel version is also faster than the one you’ll know and is less exotica/bossa nova/lounge sounding than the single version. So you need it. Of the other 2 tracks, ‘Racquel‘ dates back to the days when The Specials were still the Coventry Automatics. It’s just about the punkiest thing the Specials recorded and a bit of googling makes me think this version is the only one the band did. ‘Sea Cruise’ is a trombone-led instrumental romp through a version of Frankie Ford’s 1958 RnB hit. It wouldn’t sound out of place on Jools Holland’s Hootenany, which is interesting as the trombone player on Sea Cruise is Rico, who nowadays earns his corn playing with Jools’ Big Band.

For the record, The Specials line-up for this Peel session was:

You can find out everything you need to know about any Peel Session ever at the BBC’s excellent website here.

Oops! Thanks to the people at the 2Tone forums who have found this site and have pointed me in the direction of this, the complete Specials BBC sessions.